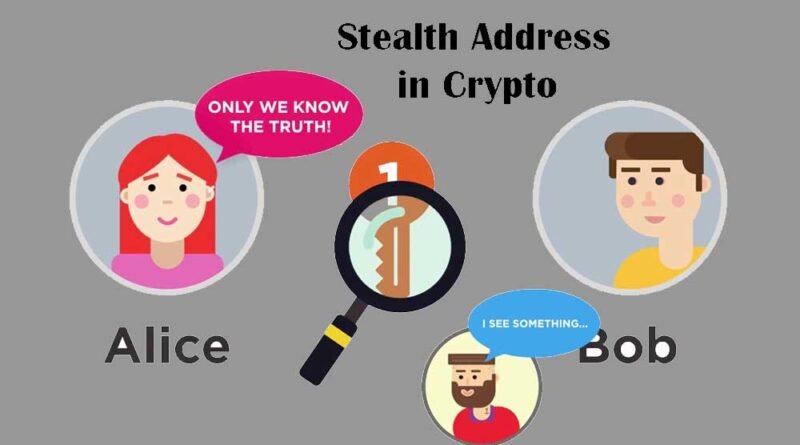 For instance, if multiple transactions of sending funds to a single stealth address are done, multiple outgoing payments will be reflected in different addresses, making it impossible to link transactions to the recipient’s published address. Also, further increasing the privacy protection of the recipient. The owner of the stealth address can use a private view key to verify all incoming cryptocurrency exchanges.

The science behind stealth addresses is based on the Elliptic curve Diffie-Hellman algorithm. At present, it is known as the new way of Bitcoin address relating to scriptPubKey or transaction generation scheme. This allows payees to be sure that the exchange of funds is done privately, non-interactively, reliably, and efficiently.

The Genesis of Stealth Address

Blockchain networks use a public distributed ledger. Such technology is used by two of the most popular cryptocurrencies: Bitcoin and Ethereum. Bitcoin is acquiring much media attention, particularly when its market capitalization reached more than 1,000 billion U.S last May 2021.

Also read: Top 8 Ways in Which Bitcoin Can Help You Grow Your Business

Statista’s recent data shows that the United States is the top Bitcoin trader globally, followed by Russia, Nigeria, and Europe. For more information on how to start trading, you can visit the   Eclac website.

As anyone can access blockchains, doubts about security features arose. To name a few concern is hacking of financial data and stealing of cryptocurrency coins. This is because a user’s identity can be tracked through their transaction history, visible in blockchains. As privacy issues of cryptocurrency continue to haunt the industry, the development of security features within blockchain networks has begun.

Back in 2011, Bitcoin forum member “Bytecoin” was the first to develop the concept of Stealth Address. It is also called Basic Stealth Address Protocol (BSAP). The mechanism relied on the Elliptic curve Diffie-Hellman algorithm. However, BSAP design has two loopholes: 1.) Transactions between the receiver and sender can easily be traced. This is because the ephemeral destination is already fixed. 2.) The sender and the receiver can have access and compute the private key provided. Thus, if the receiver does not send the payment immediately, the sender may take the money back.

Nicolas van Saberhagen then improved the BSAP concept in CryptoNote’s white paper. It was later on point as Improved Stealth Address Protocol or ISAP. ISAP is an extension of BSAP, which applies an additive key derivation technique to improve the protocol. With ISAP, the ephemeral private key provided can only be computed by the receiver. Once the cryptocurrency was transferred, the sender cannot reverse the process.

To further improve the technology of stealth address, ephemeral private spending key over usage must be eliminated. A dual-key enhancement was created by the developer “rynomster/sdcoin” in 2014, named Dual-Key Stealth Address Protocol or DKSAP. The advantage is it is an efficient and decentralized anonymous digital wallet solution. The protocol uses two cryptographic keys: “scan key” and “spend key.” This enables the computation of a one-time payment address per transaction. It was first used in the Monero blockchain, following the adaptation by Peter Todd in 2014.

The U.S. Attorney General’s Cyber Digital Task Force raised an issue concerning blockchain technology and the mechanism of stealth addresses. They published it in a report released in October 2020.

They specifically mentioned that “Crime has been expanding beyond national borders for years, but blockchain takes this globalization to another level.” Reiterating that blockchain ecosystem makes cybercrime more complex. According to them, the report also described how fast blockchain transactions could be done, which exceed sovereign and territorial boundaries.

Illicit activities surrounding cryptocurrencies are no longer new to the industry. Investigations done by authorities worldwide cited the following: exchange of drugs and cryptocurrencies in the dark web, money laundering, tax evasions, and fund soliciting for terrorist activities.

The Future of Stealth Address

Cryptocurrency is gaining a lot of popularity. Due to the global pandemic and revolution of financial digitization, everyday individuals and big companies are plunging into the digital currency trend.

This may increase cybercrime rates, increasing the demand for ways to protect data and financial account information. Stealth addresses provide a blanket of protection involving economic exchange and data.

However, the question of the abuse of this mechanism to hide illegal activity will be in consideration. Therefore, tax authorities, regulatory agencies, and governments’ increased investigation will be expected in the coming years.

For instance, Operation Hidden Treasure is under development to track down tax evasion by cryptocurrency participants. This operation will involve the Internal Revenue Service (IRS) and the European Union Agency for Law Enforcement (Europol).

The substantial growth in revenue involving the cryptocurrency market is certain. Statistics proved that cryptocurrency could produce massive wins for traders and investors. In addition, the collaborative work of developers and financial experts to strengthen the security of the technology and the government’s attention makes it more evident that cryptocurrency is the current big thing in the financial industry. Therefore, starting to learn the industry may be more advantageous for neophyte investors and traders.

In this regard, also consider reading: Data Integration Techniques for Crypto Markets

How Personal Loan Fulfill Your Financial Needs?
Conducting a Pay Equity Audit
How to Open a Free Business Checking Account Online with No Deposit
NEO vs Ethereum: Is NEO The Next Ethereum?
FBS Review Will Help You to Trade with the Best Broker
Top Place to Sell Gold Jewelry for Most Cash in 2021!
Do Credit Repair Companies Really Fix Your Credit
Best Tax Saving Investment Options Under Section 80C
Sears Credit Card: A Guide About Login and Related Issues
5 Steps to Refinance Your Auto Loan
Penalty for Tax Evasion in India
How to Save Tax with Health Insurance