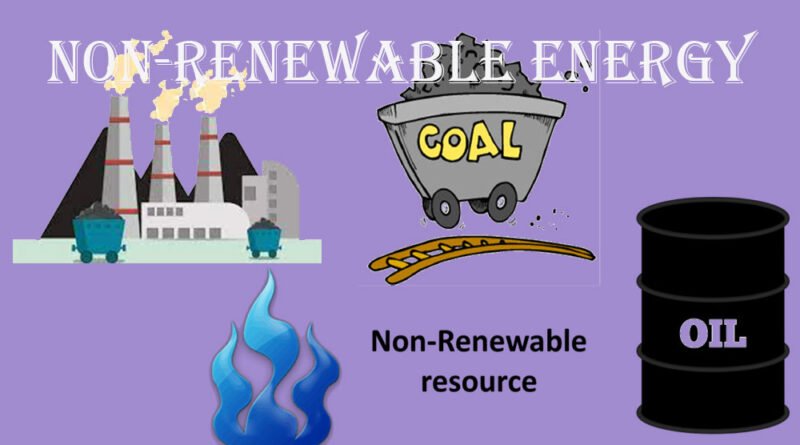 Non-renewable energy is a source of energy that cannot be replenished or renewed quickly or easily. As it takes years to form crude oil, coal, and natural gases that are considered fossil fuels. These fuels are formed naturally by animal and plant residue, buried a million years ago.

However, lately, other forms of non-renewable energy sources have emerged.

Non-renewable supply can be prepared at any location

In the case of renewables, you will have to identify the region that supports the source. This includes wind, solar and geothermal energy. Some locations may not be favorable for producing renewable energy. However, that is not the case with non-renewable energy.

The energy can be developed across several stations at any location to refine and distill it. A well-planned infrastructure can solve the transport loss woes too.

Many unique products can come from the non-renewables

The hydrocarbons found in fossil fuels can be used to create several products to use in day-to-day lives. Soaps, plastic, and many more items produced are available at a low price because of the non-renewables.

The non-renewable sector enjoys government subsidies. The companies that process fossil fuels offer many direct and indirect employment opportunities, which contribute to huge wages. Renewable energy sources also produce similar opportunities, but the number is not the same.

It takes a lot of energy to generate power from renewables compared to getting it from fossil fuels. The efficiency is much higher in the case of the refined non-renewable sources available. Along with the production chain, the advantage makes it cheaper to produce energy from a non-renewable source.

Non-renewable energy is available in all the continents where there is a significant level of population. The resource is refined into the proper products to maximize its daily impact.

The infrastructure for renewable sources comes from fossil fuels only. Coal-fired power, concrete, and natural gas are used to produce almost everything. There are concerns about the toxicity of by-products, but it is possible to use non-renewable energy across generations with responsible management.

Reduces the threat of death in cold weather

Fossil fuels may have caused a warming trend, but it also helps to reduce the number of deaths caused by cold weather.

Fossil fuels will not last forever

There is always a possibility that non-renewable resources could become unavailable at any time in the future. It is due to this reason that alternative energies are created to form a safety net.

Wars between countries are usually caused to have the upper hand and control over the natural resources. As the nation’s economy is dependent on these non-renewable resources, creating a foundation of conflicts between nations. Resulting in political unrest between countries.

combustion of fossil fuel is dangerous for health

The burning of coal fuel releases some particulates into the atmosphere. For this, a filter needs to be placed that can easily capture it. These small particles increase the risk of heart attacks and cancers. Breathing in this polluted environment can also cause lung problems. Even with the appropriate safety gears, this could cause severe damages to the lungs.

Some plants can thrive in an environment that has a high carbon dioxide level. But the majority of animals and plants need a healthy condition to survive, and Fossil fuels can cause health risks in both plants and animals.

The support system for the non-renewable energy vapors equally causes an adverse effect on the environment. The process that is practiced to produce energy from fossil fuels contributes to atmospheric emissions more than renewable energy resources.

There are only five countries in the world that contribute to 75% of the consumption of coal products worldwide. These are also considered as some of the highest polluters. The levels of water vapor, sulfur, and hydrogen in the atmosphere are constantly increasing because of the extraction, mining, and refining activities of non-renewable sources.

Non-renewable energy is cheap, and walking away from it may not be easy. A century has been spent developing the required infrastructure to consume fossil fuels meaningfully, and these technologies are 300 years old. To switch to something new and expensive is not easy.

Moreover, using renewable resources to produce energy means paying extra towards energy and its sources which may not be a feasible solution for many users. For this purpose, modern technologies can be applied that allow us to use fossil fuels efficiently. Reviewing their benefits and drawbacks will make us examine and analyze the usefulness of these essential resources.

Where do I Start to Write My Dissertation?
PCCSA, PCNSA, And PCNSE| Which is for You?
4 Ways Higher Education Improves Financial Literacy and Knowhow
Accounting Degree: Is It the Right Choice for Me?
How Much is CCIE Training? Which Institution is Better?
Best AWS Certifications in 2022: Choose the Right One
Top 5 Online Courses to Help You Learn 3D Animation with Maya in 2022
NCERT: The Most Beneficial Resource for All of Your Examinations
An Inclusive Guide to Certified Scrum Product Owner® (CSPO®) Certification
4 Steps to Find the Right US University
Six Benefits of Distance Learning
Online Master's Degrees: Best Universities for Distance Learning

Zayn is currently working as an English Lecturer in one of the reputed colleges in New York. He has even worked as a career counsellor for the last 5 years. Zayn loves to spend his spare time reading educational books, novels and writing educational blogs and articles.