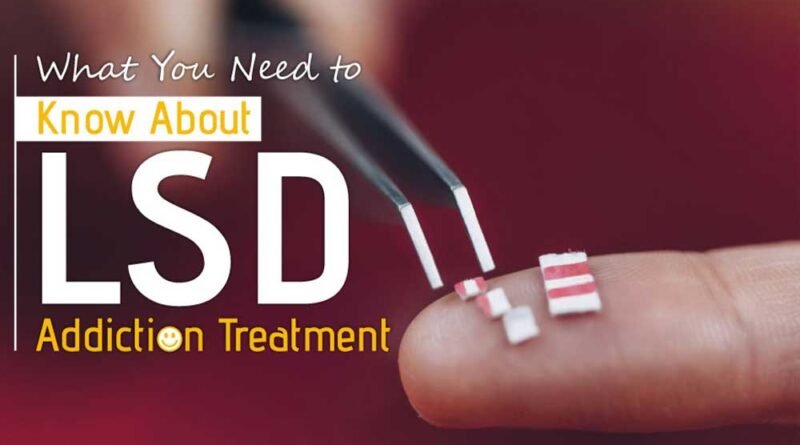 It’s available as droplets, tablets, and blotter paper which you put on the tongue and then swallow. The drug is then absorbed orally.

It’s difficult to assess an average dose of LSD just because it is delivered in such a tiny amount on paper. On top of that, different people react differently to the drug.

Too much consumption of this acid can lead to feelings of alienation and dissociation. Based on research, 20 micrograms is supposed to offer minimal euphoric effects.

LSD has been put under Schedule 1 of Controlled Substances. These are the most criminalized drugs with heavy penalties and jail time.

LSD is mostly associated with its psychedelic effects. It tends to cause a ‘trip’, an experience marked by hallucinations.

A large number of LSD abusers use it for its supposed ‘mystic experience’. Many think that being high on it leads to life revelations or unraveling of some deeper truth.

LSD abusers can experience a range of physical symptoms. However, it’s difficult to say whether those symptoms are real or something experienced/imagined under the influence of drugs.

The commonest side-effects include –

Regular/chronic use of LSD can make it difficult to function normally in everyday life and require LSD addiction treatment. It can interfere with a person’s work and social life. So, how do you know if someone is or might be addicted to LSD?

Here are a few addiction-related signs of LSD –

Generally, a person doing LSD should have no trouble stopping it without facing any uncomfortable withdrawal or physical symptoms. Because of this reason, there’s often no need for a withdrawal treatment for LSD.

However, stopping the drug can cause many people to miss their mental experiences. And, so to overcome mental dependence one may need support, therapy, and counseling.

If you or someone you know wants to stop using LSD in a safe manner, they can join inpatient rehab centers where they can receive support in the form of therapy and several other services.

Someone having a bad trip or panic attack due to the drug should get medical help. The experts can administer fast-acting benzodiazepines like triazolam and diazepam. Benzos can often instantly calm the patients and reduce panic attacks. If required, an expert may administer antipsychotic tranquilizers like Thorazine to numb the patient and stop the adverse reaction of LSD.

How Long Does It Take to Detox LSD?

It can take anywhere between 24-36 hours to rid the body of LSD. However, it can take much longer for the psychological effect to subdue and resolve. In some cases, it may require medical intervention and long-term drug use treatment programs.

It is best if you talk to a professional to know about your treatment options. Learn about LSD addiction to get the necessary help based on your situation.

With LSD, the risk of overdose or even fatal overdose is pretty much nonexistent. With that said, LSD is not exactly safe mostly because of the often risky behaviors it can cause. A trip can last more than 12 hours where a person may have no inhibitions.

Some users may experience a strong reaction to the hallucinatory effects of the drug. Because of no inhibitions, a person may exhibit dangerous/uncontrolled behavior leading to severe professional, legal, and social consequences.

The drug can be particularly dangerous when mixed with antidepressants and/or alcohol. Side-effects are extreme when the doses are large; often leading to psychosis, suicidal thoughts, and hyperthermia.

How Does LSD Affect the Brain?

The serotonin receptors use 2 major signal pathways in the cells namely – G-protein and B-arrestins. It appears, based on research, that LSD binds itself to these receptors in a way that it functions through the B-arrestin pathway mostly instead of G-protein.

Computer analysis and lab experiments further reveal that related compounds can change the structure of receptors and cause different effects.

We also know that serotonin receptors put a lid on LSD molecules. This prevents the molecule from detaching itself quickly. This might explain why the drug has such long-lasting effects.

LSD is, by no stretch of the imagination, a safe drug to do. If you or someone you know is battling LSD addiction, it’s never too late to seek rehab centers that will offer medical/professional help.